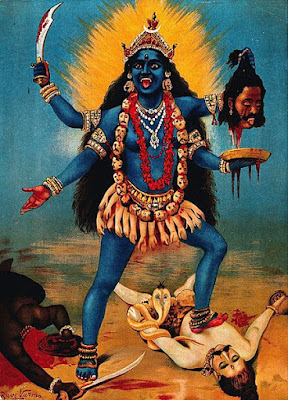 Chapter 2: Kali's Secret: Nature is indifferent to human gaze
2.1
-Kali= most dramatic form of Devi in Hindu mythology: naked, loose hair, standing on Shiva, and necklace of male heads, thirst for blood
-rise of Devi worship after post-Buddhist phase
-before, images of bulls next to bejeweled women: representation of struggle between wild and domestication
-1500BCE cattleherd migration into populated areas--> long tension
- worship of cloud-dwelling gods and rejection of the only woman god figure
-rejection of materialistic society grew: meditation= freedom--> Kali appears
-Kali-like goddess emerge, associated with rage and violence
-300 CE: Kali= discrete from Shiva, causes destruction
-appearance of more and more versions of Kali as represented by 3,6,9 or even 64 goddesses acting together-> benevolent and morbid versions
-deep appreciation of nature
-1000BCE: Kali as one instead of a collective--> perfect and most primal
-it is told then that human society is …
Post a Comment
Read more

Reading Notes: 7 Secrets of the Goddess Part B 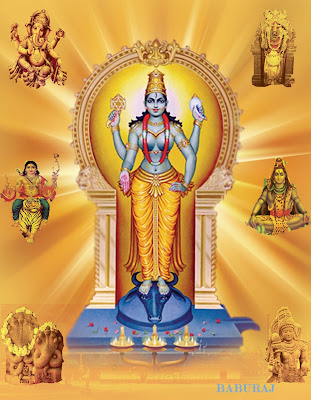 Continuing with the 7 Secrets of the Goddess, I am going to pick up at Gaia's Secret Chapter 1.3 and 1.4, where the narrator talks about treatment of women through the ages.
1.3:
-urban culture: value of obedience which showed a man's control, enforced obedience in women
-culture weighted above nature--> hierarchy instead of yin and yang--> culture domesticates nature
Egyptian, Chinese, Greek, Japanese, Hindu
-seen also in mythologies of the above cultures (like Zeus)
-women seen as those who break rules, cause problems
-men began to gain value from their possession like women-> isolation for their own good
- higher isolation= more valuable--> Snow White, an equivalent also in Indian mythology
-Greek and Hindu mythology and Christianity point to women as honorable figures
-but then they are later dehumanized to symbolize masculine honor--> rise of Patriarchy

Reading Notes: Seven Secrets of the Goddess Part A 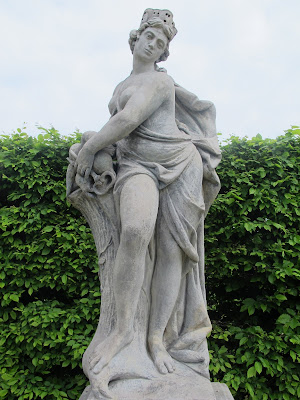 Gaia's Secret 1-2
Chapter 1:Male anxiety is outdated
1.1
-Gaia+Uranos--> Kronos, Aphrodite, and others
Kronos eats sons, except Zeus, who overpowers him, and the story goes on;
idea of female deity "side-lined" by powerful male deity is prevalent in many mythologies
-through Egyptian, Eskimo, and Indian mythologies
-females have to "womb" which is pure, but the males must compete
-pastoral communities realized not all males were necessary
-in matriarchal societies, to ensure males could not dominate, the males were sacrificed
-in much earlier times, "virgin" meant a woman who was ready/ open to have children, and "prostitute" meant a woman who was free to go to any man
1.2
-Yami and Yama, brother and sister and other mythologies show a relationship of death with sex, sex with pleasure, and pleasure with women, leading to an association of women with vulnerability
-rejection of women--> strength and freedom of suffering
-women became in…
Post a Comment
Read more 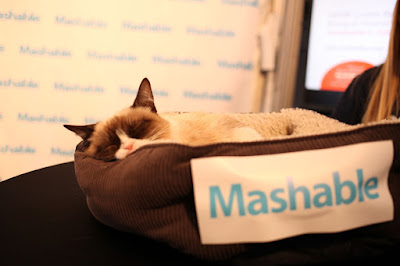 I'm not sure if this is meant to have us look up more information on the Indian Epics or just something we've learned this week, so I am focusing on the later options. This week I read a very thought provoking article on sleep deprivation and would like to see where it takes me in the world of wikipedia. Sadly, science articles don't always include images, and the one that was available was not fit for use. So I just had to go with a cat, the rulers of sleep.
Even Grumpy Cat Needs to Sleep source
First, I am starting with Wikipedia's article titled Sleep Deprivation (source). As I previously stated, my inspiration was another different article I read about the effects of sleep deprivation. Prior knowledge and that article prompted my curiosity to see what Wikipedia has to say about it. WIkipedia's take listed many causes and reasons I already was aware of, but one symptom caught my attention. 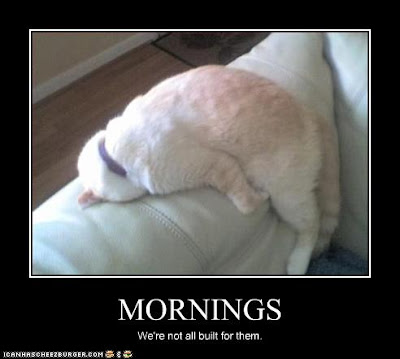 I have found through the course of this pandemic that many of my college friends, myself included, are having trouble finding reasons to stay on a proper sleep schedule. Many of our classes post recorded lectures that we can do any time we want, so the choice to fall asleep at a decent hour lies mainly with ourselves, especially for those who don't live at home.
In the article "How Sleep Deprivation Decays the Mind and Body"(source), the author Seth Maxon describes the effects lack of sleep can have on anyone, no matter how sane they seem to be. At 18 years old, Maxon conducted an experiment on himself to see how long he could stay awake, driven by expresso and a trip abroad. He made it around 4 days, collapsed involuntarily in the middle of an airport, and woke up in a hospital. I have no idea how he made it that long. The few times I've pulled an allnighter, I've fallen asleep at 5 pm the next day.
I've always been interested in sleep, so this article con…
Post a Comment
Read more 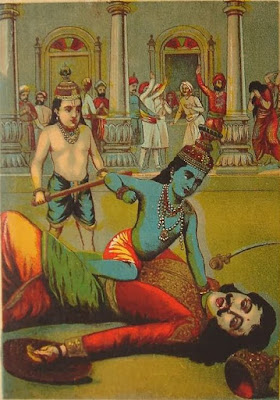 Through Part A of this Epified: Krishna series, we are introduced to Krishna, the 8th child of Kamsa's sister who was prophesied to kill Kamsa. With the help of the gods, Krishna's father was able to trade Krishna with another child, hiding Krishna from Kamsa's wrath. We watch Krishna grow up as a mischievous boy exemplifying god-like powers, overpowering demon after demon sent by Kamsa to destroy him. Now I will go through Part B.

Krishna Humbles Brahma: Once while Krishna was with his friend, Brahma (creator) appeared and found Krishna sharing food with his friends. To test Krishna, Brahma took the cows they were watching and then kidnapped his friends. With his power he knew Brahma was behind this, and played a trick on him in turn. Krishna's copy of his friends and cows convinced the other villagers that nothing was wrong for a whole year. Brahma learned of this, acknowledged Krishna's powers, and returned his friends.
Krishna Rides Hastin: Krishna's brothe…
Post a Comment
Read more 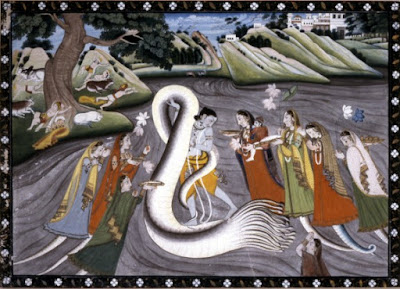 This week I decided to explore the tales of Krishna through the resource of Epified: Krishna (source)
Introduction: A man was born with many enemies who destroyed everyone in his family. He grew up and became a king. As king, he made many powerful allies and protected his loved ones. But no one truly understood that he was not a part of their world.
Kamsa: When Arjuna was born, another man was born who would guide the Pandava sons and bring an end to an age. Kamsa cruelly ruled a kingdom called Mathura. He was told that an 8th child would be born from his own cousin who would end his cruelty. He threw his cousin into prison and resolved to kill all of his cousin's children. When she was carrying her 8th child, everyone felt the light and purity of a god coming to earth, and her child was the 8th incarnation of Vishnu.
Vasudev Meets Yamuna: The father of the child, Vasudev, held his newborn while fearing the future. However, the guards and all who opposed them had been put into a d…
Post a Comment
Read more
More posts